An Enhanced Throwback Story: Rebar Verification, Minus the Rebar 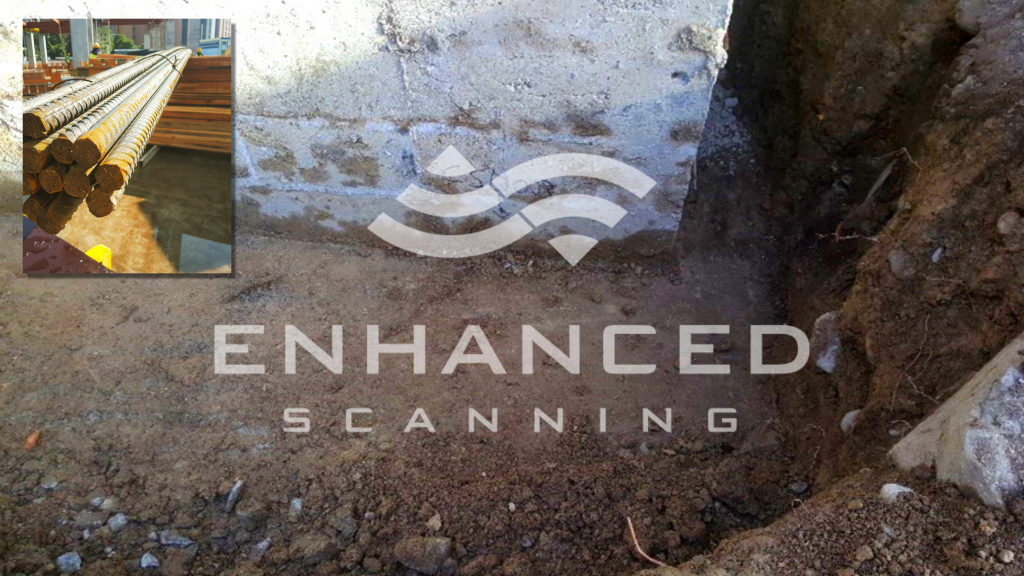 Rebar verification work is quite common for us. As GPR scanning professionals, we’re very familiar with concrete inspection and rebar verification because, unless you have Superman x-ray vision, you can’t see through slab-on-grade concrete without a GPR.

On this particular job, though, we ran a rebar verification job like nothing we’d ever seen before. It was insane, and it took several scans before we could believe what we were seeing (or not seeing).

A Quick Introduction to Rebar Verification

Rebar (aka reinforcing bar) is a regular part of concrete applications. The purpose of rebar is to increase the strength of concrete so it can resist breaking and tension. Before cement is poured, a rebar inspection takes place by the city or county to verify that the rebar size, layout, and orientation will give the concrete the necessary strength for its intended use. This rebar inspection is a very important step in the construction process, and it cannot be skipped.

If concrete has already been poured, inspecting the rebar is tricky since there’s no way to see through concrete. The only way to inspect it is with GPR technology, and that’s where we come in.

For a typical rebar verification project, our job is to scan and assess things like:

Then, we compile a report to explain our findings. However, this was no typical rebar verification job.

The Project Details: Not Your Average Rebar Scan

We got called out to a 5,000 sq. foot home in beautiful Whitefish, Montana. The homeowners had recently bought the house and started to renovate it. However, the contractor they hired quickly noticed a lot of things that weren’t up to code.

This obviously made the homeowners very nervous. They began to worry about the foundation, so they called us to do a complete concrete inspection to assess the home’s structural integrity.

When we arrived, we started by scanning the footings and saw something odd. There was very little rebar present. This is the foundation of the home, so that was pretty worrisome and definitely not a typical find. But, we didn’t say anything yet.

They directed us towards the back of the house. It had this huge concrete patio with a twenty-foot-high roof. The roofline extended about thirty feet beyond the house and over the porch, so it was a very large roof.

The roof was supported over the patio by a column on the north end and an outdoor fireplace and chimney on the south end. So, the chimney’s footing held up half of this enormous roof. We knew it was important to scan the footing for rebar to make sure it was structurally sound.

The Unexpected Results of the Rebar Scan

When we got to the chimney, we found literally zero rebar in the chimney’s concrete footing. This is virtually unheard of, and we were shocked.

At first, we couldn’t believe what we were seeing, so we kept scanning and saw an anomaly in the data in one section of concrete. We followed the anomaly and found one piece of partially embedded rebar sticking up out of the concrete!

There were only about twelve inches of rebar embedded and twelve inches sticking out. While we’re not licensed structural engineers, we feel pretty confident in saying that this single piece of bar was doing nothing for the structural integrity of the footing. We can only assume that the initial job went like this:

It was a lot to take in. The images below show the single rebar piece we located and the small area of steel reinforcement as it appeared in the radargram. 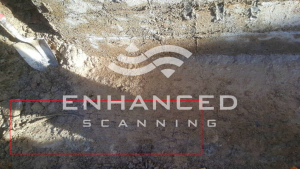 The Heavy Burden of Proof

In private utility locating and concrete scanning, the more extreme your claim, the more data you need to back up your claim. A roof-supporting chimney footing with zero rebar is an extreme claim.

That’s why we didn’t tell the homeowner the second we discovered a lack of rebar in the footings. When we first saw it on our scans, it was a lot to try to figure out. We didn’t want to burden the homeowner with speculation. We needed concrete proof (no pun intended) that things were as dire as they appeared to be.

We proceeded to take numerous scans and found zero rebar in the chimney footing. This confirmed that things really were as bad as we thought. After thoroughly scanning everything, we told the homeowner exactly what we found (or rather, didn’t find). He just shook his head, laughed, and said, “Yeah, that sounds about right.” (The radargram below shows the large footing area we found without any rebar.) 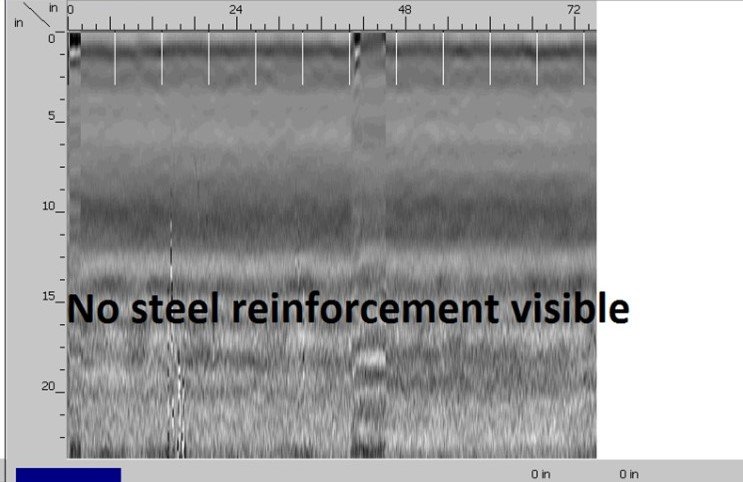 Data is Crucial for Rebar Verification

When you come across things that really confuse you during a scan, you have to be absolutely sure because concrete inspection is serious business.

It’s a GPR technician’s job to be thorough and gather all necessary data before informing the customer of any findings. Even if something initially looks concerning, it’s important to have all the data first before presenting it to the client.

In this case, the information was just so shocking that we needed to make sure the data was accurate and then inform the homeowner with as much detail as possible.

When you hire Enhanced Scanning, you can trust our professional GPR technicians to provide you with as much data as possible to help you make an informed decision, even if the data is hard to believe. Contact us today.